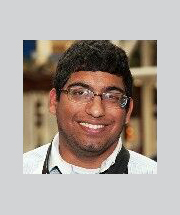 Affiliation: University of California at Berkeley

Hamza Jaka is a graduate of the University of California-Berkeley, with a Bachelor’s Degree in Linguistics, and is a member of the incoming class of 2018 at Berkeley law hoping to become an employment attorney and policymaker. Hamza has been an active leader in Disability and Human Rights in the US and abroad. He was co-chair of the Kids As Self Advocates (KASA) Advisory Board for two years and a board member for the past seven year years. He has also interned for the US Department of Labor’s Office of Disability Employment Policy (through the American Association of People with Disabilities internship program), working on youth and minority employment issues, and has interned with the Wisconsin State Council on Independent Living examining housing policy.

Hamza is a graduate of the UNESCO Human Rights Institute’s 8th Annual Intergenerational Leadership Program. Hamza interned with the Department of State’s Office of Global Youth Issues in the summer of 2013 to help build and update a Global Youth Affairs curricula. He was featured as a young leader to watch by the State Department for Black History Month. As co-president of the UC-Berkeley Disabled Students Union from 2010-2013, Hamza handled disability affairs for UC Berkeley students. In addition to his years as co-president, Hamza served as a board member of the group in 2014.

He has served on the Board of Directors of the Berkeley Student Cooperative for the 2011-2012 and 2013-2014 school years. He has served on the United States Business Leadership Network’s Student Advisory Council from 2012 to today, creating the Affiliate Liaison position, and serves as an advisor to the Enabled Muslim project. Hamza also started the non-profit project, the Global connection, with supports and provides resources to a disability organization, Milestone, in Pakistan. In his free time, Hamza loves to read, study, exercise and spend time with his family

The intersections of race, justice, and language in the law. I am also interested in disability justice education, and the nature of competence when it relates to disability.
SEND Your Feedback