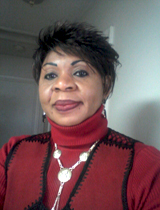 Center for Persons with Disabilities

Helene, born and raised in Democratic Republic of Congo (DRC), attended pre-med school at the University of Kinshasa. Her husband, a diplomat from Congo, was assigned to Cameroon where she attended the University of Yaounde in the business department. The same diplomatic duty took them to Liberia (West Africa), where she completed her B.S Degree in Economics, minoring in accounting at the University of Liberia, in Monrovia. While living in Cote d’Ivoire (Ivory Coast), she worked at The African Development Bank as a Project/Research Assistant at both the Environmental/Sustainable Development Unit and the Development Research and Policy Departments for years. After returning to Liberia with the husband’s same duty, she chose to volunteer and was very active in informal counseling to youth, young couples, and others. She specifically, worked closely with children exploited through war, and interacted with sexually abused women and girls. Her willingness and ability to listen, and supportive nature made a big difference to those she worked with; and later guided her to becoming a social worker. She also hosted diplomatic gatherings for other diplomats, government figures, and high-level international professionals at various times.

They traveled extensively around the world with assignments, but Liberia was the last diplomatic assignment because the civil war took place and the DRC was experiencing political unrest; this resulted in Helene seeking safety in the United States. Because her diploma was not recognized in the US, she worked at Merit Medical while taking prerequisite courses for enrollment in the Social Work Master Program. She earned her Master of Social Work (MSW) degree from the University of Utah in Salt Lake City in 2015. Helene did her Social Work Intern Practicum at UNP Hartland helping refugees develop life skills, connecting them with relevant social services, and meeting one-on-one with refugee women. At the Asian Association of Utah, she administered psychiatric evaluations to refugees, completed diagnostic information and planned interventions with social work colleagues; at Holy Cross Ministry, she worked in a school counseling children, teaching social skills, meeting with parents and teachers, and running activities in an afterschool program. Currently, Helene is a substitute teacher at both Salt Lake School District and Granite School District, while working with Utah State University on Utah Diversity Refugee Efforts Investing in People (U-DIR) project, and volunteers with refugees. She is fluent in English, French, Lingala, and Ciluba; she is a multicultural global individual. Helene likes to make a positive impact in other people lives, especially women and children.