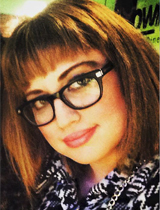 Institute on Disability and Human Development

University of Illinois at Chicago, IL

Katherine Perez Enriquez, a third-generation Mexican-American who identifies as disabled, hails from La Mirada, California. She has worked on a local, national, and international level on disability policy and law. Katherine holds a bachelor's degree in Psychology and Spanish from Chapman University and a J.D. from the UCLA School of Law. She currently is a third-year Ph.D. student in Disability Studies at the University of Illinois at Chicago. Her scholarship focuses on a critical analysis of disability policy and law. Her work as a UCEDD Diversity Fellow includes collaborations with "Cambiando Vidas", a group associated with Access Living in Chicago, and the Congressional Hispanic Caucus Institute in Washington, D.C. Her aim is to strengthen the consciousness and movement around issues concerning the intersection of Latinx and Disability.

1. Please describe your activities during your fellowship experience. Describe your final capstone project(s).
In December 2015, after received the University Centers for Excellence in Developmental Disabilities (UCEDD) Diversity Fellowship, I sought out Michelle Garcia from Access Living (an independent living center) in Chicago to become collaborative partners. I introduced myself by stating that my professional goal was to unite the Disability and Latinx communities because both communities share important constituencies, but often do not do intersectional advocacy. We were on the same page and we got to work organizing a conference for Latinxs with Disabilities. From that moment, I became essential to the organizing efforts. The conference, titled “Building a National Network: Empowering Latinos with Disabilities,” was a success, convening about eighty people from all across the country, including Puerto Rico. We proposed the idea of having a coalition at the conference, and I led attendees through an exercise through which we generated ideas about coming together as a community.

Since the conference, I have taken a strong leadership position within the formation of the coalition. I sought out and secured a good group of individuals who have supported the coalition founding, lead weekly meetings, and work tirelessly on our initiatives. I am a team builder and action-oriented leader, and I know others in the group would describe me this way as well. I have been praised by members for constantly pushing the coalition to move forward with our objectives, despite the typical barriers that arise with organizing such a diverse community. It is truly incredible that we just started organizing the coalition this summer because we've already progressed with a solid draft of our Mission and Vision statement and organized committees including event planning, outreach, fundraising, advocacy, policy/legal and resources. Each of these committees has a committee coordinator who coordinates meetings and reports back to the group.

Although we have no funding, we’ve talked about incorporating into a 501(c)(3) status and fundraising through grant writing and annual conference fees, among other efforts. In the meantime, everyone has given their time voluntarily as we share similar goals. Since we have a sizable group, each individual does not need to spend more than an hour or two every week to contribute. I’ve worked hard to coordinate successful meetings and action items with everyone. We have worked successfully without funding as we lay the group’s foundation.

An important piece is our social media presence, which I have built and worked hard to sustain. For example, I am continuing to develop our website which gets at least a hundred new views each week. The website is a touchstone for our organization as it contains resources, information about the coalition, member contacts, and will prominently display a blog. The blog serves to capture the voices of Latinxs with Disabilities whose stories have been overlooked in the public sphere. We invite those who are Latinx with a disability, their families, advocates, and allies to write a blog, write a short story, share photographs, write a poem, or submit any other way of expressing their experience. We will upload those submissions onto our website.

As another example, our Twitter followers have grown rapidly, and we have joined the hashtag revolution by driving our ideas into the Twittersphere. The disability community has done an incredible job with the #CripTheVote campaign. However, we have not seen messages in Spanish or directed to Latinxs with Disabilities. Thus, up until the election, we will be a part of the debate in both Spanish and English attempting to welcome those who speak only Spanish to join the #CripTheVote debate and ultimately to feel welcome in the disability rights community. Using Facebook, Instagram, and Twitter to reach our community and engage with the disability community at large is effective. Social media has become a site of accessibility for those who have found many physical places inaccessible. As the disability community on social media grows, it is our goal to make sure that Latinxs with Disabilities are part of it.

In addition to my initiatives with the conference and the coalition, I returned to my old stomping grounds at the Congressional Hispanic Caucus Institute (CHCI). I had been a 2006-2007 fellow of the program. I had a meeting with the program director, Reynaldo Decerega, about building a bridge between the disability and Latinx communities. To this end, I described the importance of such a prestigious organization as CHCI to engage with disability rights policies especially as they impact Latinxs. He noted my enthusiasm and invited me to give a training to their program participants. I gave the training, “Latinos and Disability: A Policy Primer” in February of this year. I received great feedback about my presentation, and I look forward to continuing my collaboration with CHCI.

2. Who did your project inform, help, influence or impact? (UCEDD, individual, community, state) How?
I embarked on three collaborations during my UCEDD fellowship. First, I partnered with a national organization, the Congressional Hispanic Caucus Institute Fellowship, to provide a training on disability policy and how it affects Latinos. This project impacted the program participants who are hailed “the next generation of Latino leaders” as well as the program directors at CHCI by putting disability policy on their radar.
Next, I partnered with Access Living in Chicago (an Independent Living Center) to organize a national Conference on Latinxs with Disabilities. This project impacted Michelle Garcia who works at Access Living and needed support to see this conference come to fruition. My support of Michelle has helped her meet her professional objectives by supporting her in areas that she may not have been familiar with, particularly because I had prior experience organizing a conference. Additionally, it had a national impact because the conference hosted leaders working with Latinxs with Disabilities throughout the nation including those working in ADA centers, independent living centers, educational institutions, and healthcare arenas. The impact will grow over time as we create bridges and a community of those who are dedicated to addressing issues important to Latinxs with Disabilities.

3. Why did you choose to work on that project(s)?
I chose to work on these projects because they align with my mission to build a bridge between Latinx and Disability communities, and because they require leadership qualities (such as coalition-building and teamwork) that I have sought to hone.

4. What did you gain from being a Diversity Fellow?
I gained lots of quality leadership experience that has built my confidence that I can be a leader in the disability community, and in particular in the Latinx/disability community. Also, I have made so many important contacts and received positive support from leaders in the education and professional community.

5. How will this experience impact your education or career decisions?
This experience helped me continue toward being an activist scholar. Although I see myself as a law professor or a policy expert, I know that I will remain a leader actively engaging the disability community to build intersectional identities.

6. What are your future goals? Where do you see yourself 5 years from now?
My future goal is to impact disability law and policy to better serve our community. Five years from now I hope to be either a law professor or engaged in government work as an attorney or policy work. I see myself still engaged through Board memberships and committees on organizations and coalitions that are making a difference in disabled people’s lives. In particular, I hope to be involved in a strong National Coalition for Latinxs with Disabilities. I also see myself publishing prolifically on issues that matter to our community.

7. What recommendations do you have for other fellows?
I recommend that future fellows take this fellowship as an opportunity to demonstrate their capabilities but also to challenge themselves and grow in areas of leadership that they wish to build in themselves. I recommend that fellows actively seek out roles that are waiting for them, but also to create roles and think outside the box about how to create new initiatives that serve an area needing attention.